Zooming Tools for PC and Mac

Posted by claudiolassala in Productivity on March 15, 2016

Zooming tools are very useful whenever doing a presentation or training. It helps both the people at the back of the room, as well as drawing people’s attention to the area of the screen you need them to be looking at.

On the PC I’ve used ZoomIt, which is part of Microsoft’s SysInternals tools.

Recently I’ve found Zoom It for the Mac, which is cheap, and works like a charm. 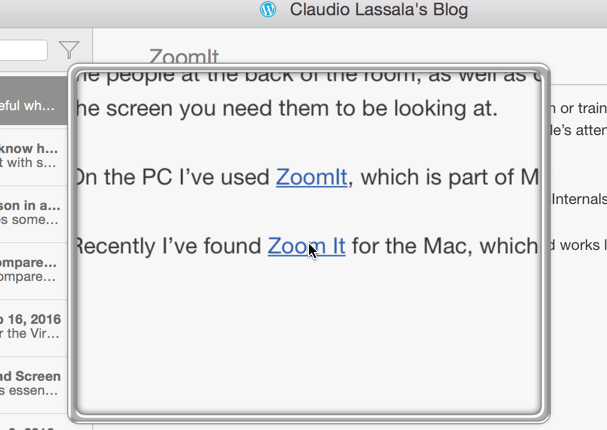 Integration of Beyond Compare and Parallels on the Mac

Posted by claudiolassala in Software Development on February 23, 2016

I’ve been using Beyond Compare as my tool of choice for file and folder comparison for a long time now. When I first moved to the Mac world there wasn’t a Mac-version available yet. That was a bummer. Fortunately, now there is one now.

When I need to do work on a PC, I run a Windows virtual machine on my Mac using Parallels Desktop.

I’ve just learned recently that I can use my Beyond Compare on the Mac directly from within my Windows virtual machine (at least using Parallels). It works just like that: I invoke the comparison from inside the virtual machine, and Beyond Compare pops up on my Mac (the host). Pretty nifty!

One great benefit is that I can have just one license of Beyond Compare for the Mac, instead of having licenses for both the PC and the Mac.

Posted by claudiolassala in Virtual Brown Bag on January 27, 2016

These are my notes from the meeting yesterday…

Chocolatey
https://chocolatey.org/
George’s recommendation of a Machine Package Manager. Since I still do some work on Windows, I’ll check out this tool.

Vimium
Vimium is a Chrome plugin that adds VIM commands to your web navigation. I’ve been using it for several years now, mostly for the following feature: I hit the F-key, and then Vimium assigns a combination of letters to anything clickable on the page, so I can do all of my web navigation without using the mouse.

ConEmu
George mentioned this tool as a etter console for Windows: https://conemu.github.io/
I’ll definitely check it out. I’ve been using Console2 for a long time, but ConEmu seems to be a lot better.

Emergent Task Planner
JB’s recommendation for a paper task planner. As much as I like doing everything electronically, I have started using paper for a couple of notes here and there (which I keep syncing it back into Evernote), just in order to try doing things differently. I may try out this task planner and see if it works with my flow.

Elixir
JB shared a little of the awesomeness of Elixir’s pattern matching and how you can write some expressive code with it.

The video for yesterday’s meeting is up!

Using TimeSnapper for more than helping with timesheets

Posted by claudiolassala in Software Development on January 23, 2007

So a few weeks back, my friend and co-worker Simon has showed at an internal meeting this tool called TimeSnapper (http://timesnapper.com/). The main selling point of the tool is to help people recreating their days to make it easier to produce timesheets. I’ve downloaded it’s free version and started to use it to see how I like it. On the last few days I’ve noticed it not only helps with the timesheet, but also with my software development efforts. I’ll explain:

I’m starting to think of TimeSnapper as a good tool to help me getting back on track after switching gears from one task to another, or helping me understanding what paths I’ve gone through to come to a specific conclusion. For instance, when I’m writing code I’m trying out different things, and eventually I’ll settle down to something that I like, and probably will refactor the code. By playing back (at fast speed, of course) the moments as I’ve worked through the code, it gets easier for me to understand why I’ve taken some design decisions, and what I should put on the comments to better document the code.