The Importance of Technical Communities

Technical Communities may be the single most important factor I’ve had (and continue to have) in building my professional career. Yes, that’s how important I believe they are.

I first got involved with communities back in the late ’90s. I got a job where I got to work with FoxPro, which I knew nothing about other than that it looked similar to what I knew at the time: Clipper and dBase. That was also around the time the internet was becoming a thing in Brazil in the days of dial-up connections.

In order to get up and running on the required tech stack, I found online forums in Portuguese.

There were many resources in English for FoxPro, but not a lot in Portuguese. I knew some English at the time. Many Brazilian developers didn’t. So here’s what I did: I’d see people’s questions in the online forums, look up the answers in English on the web, and reply to the posts in Portuguese. Why did I get from doing that?

A member of the community invited me for lunch one day and gave me a couple of FoxPro books. I asked the reason for the gift, and he said: “If I help 100 people, maybe one of them will give me a hand in a moment when I could really use some help”. I have taken that lesson to heart and applied it to my life deliberately ever since.

Because I was answering so many questions, people thought I was an expert.

When a new version of FoxPro was about to come out, members of the community reached out to the Microsoft office in Sao Paulo to ask if there was going to be an official launch event. The MS manager said they could do that, but there were no MS employees in Brazil who were well-versed in FoxPro. The community member said, “well, problem solved: I know a guy”. Next thing I know, I’m presenting two full-day, soldout launch events. Attendance included people flying from other states (if you don’t know how big Brazil is, please pick up a map…)!

So that’s how I broke into technical public speaking. Next, I got into writing articles, creating a magazine, organizing conferences in a few different States, organizing study groups, creating training videos…

So much came out of the common need to learn a new tech stack, followed by the simple action of helping others along the way, with however little I knew of anything.

The fact that I’ve been living in the US since 2002 is directly related to this involvement with technical communities.

See why I have a cute fox as part of my office decor? Never forget where you come from!

Also, when some youngsters make smartass comments about the mention of FoxPro on my business card, I may just say: “sit down, kid, let me tell you a story…” 😉 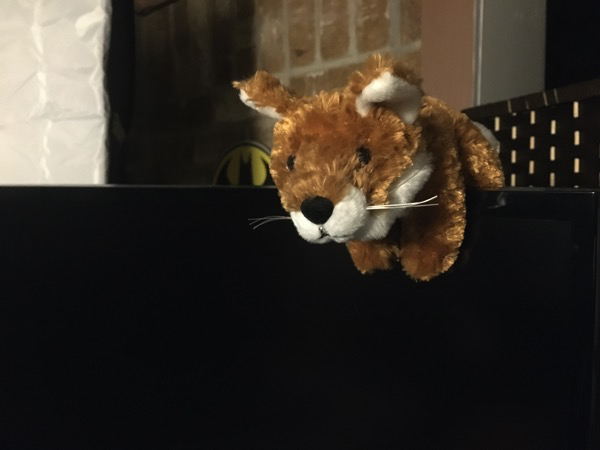 This entry was posted on December 4, 2020, 9:18 am and is filed under Software Development. You can follow any responses to this entry through RSS 2.0. You can leave a response, or trackback from your own site.