Is it a code smell to use Mocks in unit testing?

But first, I’ll start by clarifying that developers asking that question usually mean “test doubles“, instead of “mocks”.

Some situations that might indicate code smell in tests include:

If the system under test (SUT) requires too many test doubles to satisfy its dependencies, it likely violates the Interface Segregation Principle

A client should never be forced to implement an interface that it doesn’t use, or clients shouldn’t be forced to depend on methods they do not use.

Take the example below:

To write a unit test for SomeMethod, we would need mock each one of the 4 dependencies.

By inspecting how those dependencies are used, we could identify a new abstraction that offers what SomeClass needs:

Now there’s only one dependency to deal with in tests, and it’s easier to learn what that dependency provides.

An example of code smell

Here’s a test I’ve run into many years ago: 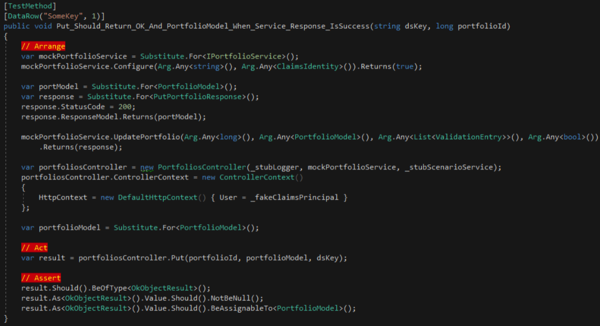 According to the name of the test, it verifies that the “PUT method returns OK and PortfolioModel when service response is successful“.

When I’ve read through the test, these considerations came to mind:

After raising the issues with the developers on the team, we identified the design issues that resulted in tests having to be written that way. The tests were rewritten to isolate and call out the issue, and a design change was proposed.

This entry was posted on November 15, 2022, 9:23 am and is filed under testing. You can follow any responses to this entry through RSS 2.0. You can leave a response, or trackback from your own site.